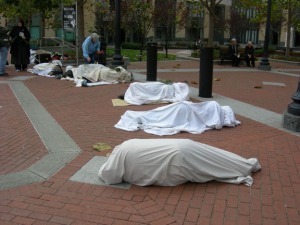 Yesterday I posted in my Spanish blog that I had been listening to Leon Gieco’s song,
“Cinco siglos igual” (which translates roughly to “the same thing for five centuries”) and that I couldn’t help but think that despite all the talk and the hoopla, we are in some ways in the same dark place as when the whole colonization adventure started, with a very small group of very self-satisfied people, mostly male and white and rich, and with a whole humanity of people who are clueless about why their lives are such a mess, despite frequent forays into drink, alcohol, meaningless sex, soap operas, and the now ubiquitous video games.  There are days such as yesterday when I go from one task to another and feel satisfied and glowing at the small and the larger victories.  The case was won, no matter how small, there  is a smile on the face of the woman who was lonely and depressed, or even, as happened last night, a fellow activist/sufferer in a faraway land responds to a blog post saying my post was a wonderful reflection of Jesus’ own vision…

But this morning  I have awakened in the doldrums; once again I despair that everything will remain the same, that no one will care that it will be the same thing as has been going on for five centuries.  We should create a magic potion about how to stay up when everything around you is going to hell…

I admit to a bit of nostalgic watching of a Harry Potter marathon, with plenty of blood and mayhem, dark curses and even the apparent death of the hero… but he came back!  And just before he comes back, another Gryffindor student throws some marvelous words at the evildoer, who seems to have come out triumphant, to the effect that people die every day, but they are with us, and the fact that one fights together in solidarity is what matters… Somewhere in that lovely message is my particular salvation today.  But just now, I would like to go back to bed rather than get up to slay me some more monsters… (no more slaying of dragons for me, which I rather happen to like).

So another Leon Gieco song will have to do for me… he must have written it on a day very much like today, when he was despairing.  The lines in the very first verse is my prayer always:  May I not be indifferent to pain, and may dried old death not find me empty, not having done enough.

All that I ask of God
is that I not be indifferent to pain;
that dried out death does not find me
alone and empty, not having done enough.

All that I ask of God
is that I not be indifferent to injustice;
that my other cheek may not be slapped
after a claw has scratched out my luck

All that I ask of God
is that I not be indifferent to war;
it is a large monster that will trample
all the poor innocence of people.

All that I ask of God
is that I not be indifferent to deceit;
if a traitor has more power than some
that those ones do not easily forget him.

All that I ask of God
is that I not be indifferent to the future;
evicted is he who has to march to live a different culture. 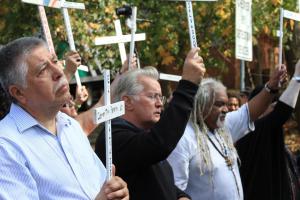